Open your eyes to life!

My procrastination skills did almost cancel the whole experience. Too cold, too sad, too happy, friends said they’d like to join in, friends aren’t responding. A never ending list of reasons.

But then, Time has a way of reminding one that there are some things that can’t wait forever. So reservation made, reservation changed due to unexpectedly high temperatures, Sunday morning, top down, off we drove to Toledo.

No one mentions the one thing about adventure sports — The waiting. The interminable waiting.
Hours after we signed waivers on our lives, it was time to gear up and get going.
If you guessed that Alex chose these to fill these long hours catching up on Sky Diving Accidents, you wouldn’t be wrong at all.

I was jumping with an instructor called Houdini. Yes, I did wonder if he’d perform a disappearing act mid sky. I also wondered if his end would be as dark and ugly as that of his namesake, with me taking the brunt of his ignominious fall to the patch of earth that we targeted. Yes, I was in a perfectly normal frame of mind.

Jumpsuits assigned, the instructor calling out a steady stream of Dos and Don’ts in a calm, measured voice, that only served to up the tension, we dressed and waited for our turn.

And then we saw it. The plane.
I’m still surprised it’s called that.
It was a big old hunk of metal. Stripped of all padding, utilitarian to the point of being frugal.

For some reason, boarding and taking off reminded me of a kidnapping scene from a B movie. Surrounded by veteran divers, photographers, enthusiasts trying for their “certification”, we were bundled into the plane. The far end of the plane. The question “Are you sure?” came while we were cruising at a 1000 ft, followed by ricocheted laughter at our choice or it’s lack thereof.

More instructions, more laughter, war whoops, and daps (handshakes) flooded the compartment as the doors were opened at 2000ft for 2 divers.
We kept climbing. So did the tension. And the questioning of my sanity.

Just when it was time to strap on the eye protection gear, Houdini whispered to me. “The one thing I can guarantee you is that whatever negative feelings you have, you’ll leave them out there. Remember, it’s like putting your hand out the car while driving. If you go against the wind you get stung. If you adapt to it, you can fly. We are going to fly today. This is going to be an experience of a lifetime. ”

For an interminable moment, we stood poised at the door, looking into the blue expanse. I’d say the ground dwindled to a mere speck, but that’s not true. The Sky went on forever. I lived for the sound of the wind, the blue of the heavens, and the throbbing of the motor.

For a split second, I thought this is what the end feels like. And suddenly I was flying. No, not falling, not being pulled down, but being buoyed up by the wind. Feeling weightless and FREE. This is how birds feel like. Each time they spread their wings. It’s glorious. It’s incomparable. It’s rejoicing with every atom of your being.

Once the videographer left us, I was given the choice of a slow, calm trip or a game with the wind. I chose to play and we banked to right and somersaulted and laughed and exchanged stories and secrets.
Psstt…. Skydivers know why birds sing… and now I know it too.
Houdini claimed that skydiving is better than sex … I said I’ll need more data on that before I jump to conclusions.
And then he recounted a love story. Of how he met his (now) wife while skydiving. A random, tandem jump. He was the instructor. Lord knows floating through the air with a spectacular bird’s eye view of the world is a perfectly great place to start a love story!

Before long it was time to join the mortals. Yes, flying does have this awful effect of making one feel like a demigod.
An almost perfect landing. And the indomitable desire to do it again!

The high didn’t end there. And the comment I’d remember the most from after is when Houdini told Alex to look at me and said … see those eyes, see that sparkle?

All that fear, all that heart pounding, all that sweat and blood and HCL in the stomach… and it came down to being one of those moments when I felt truly alive.

If you are wondering if you should or shouldn’t, my 2 cents, take a leap of faith, even if it’s out of a plane, a new job or a new life.
Reset. Restart. Renew. As many times as you need.

Life is so very beautiful! Just take a bird’s eye view of it. 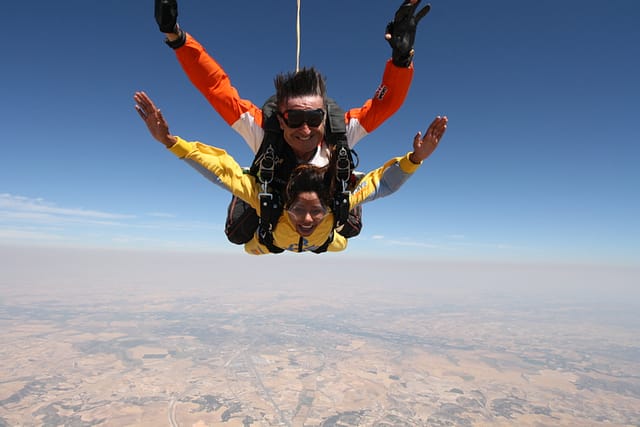 Reflecting in my garden

This site uses Akismet to reduce spam. Learn how your comment data is processed.